By Katie GannonSeptember 12, 2019No Comments

If you haven’t yet heard of Husk Distillers’ Ink Gin, then you must have been in a remote location for the past 24 months (lucky you!). This curious beverage has become a staple in bars around the world (made famous by a surprise endorsement from Margot Robbie on Instagram). You know, the gin that starts blue, then turns blush pink? 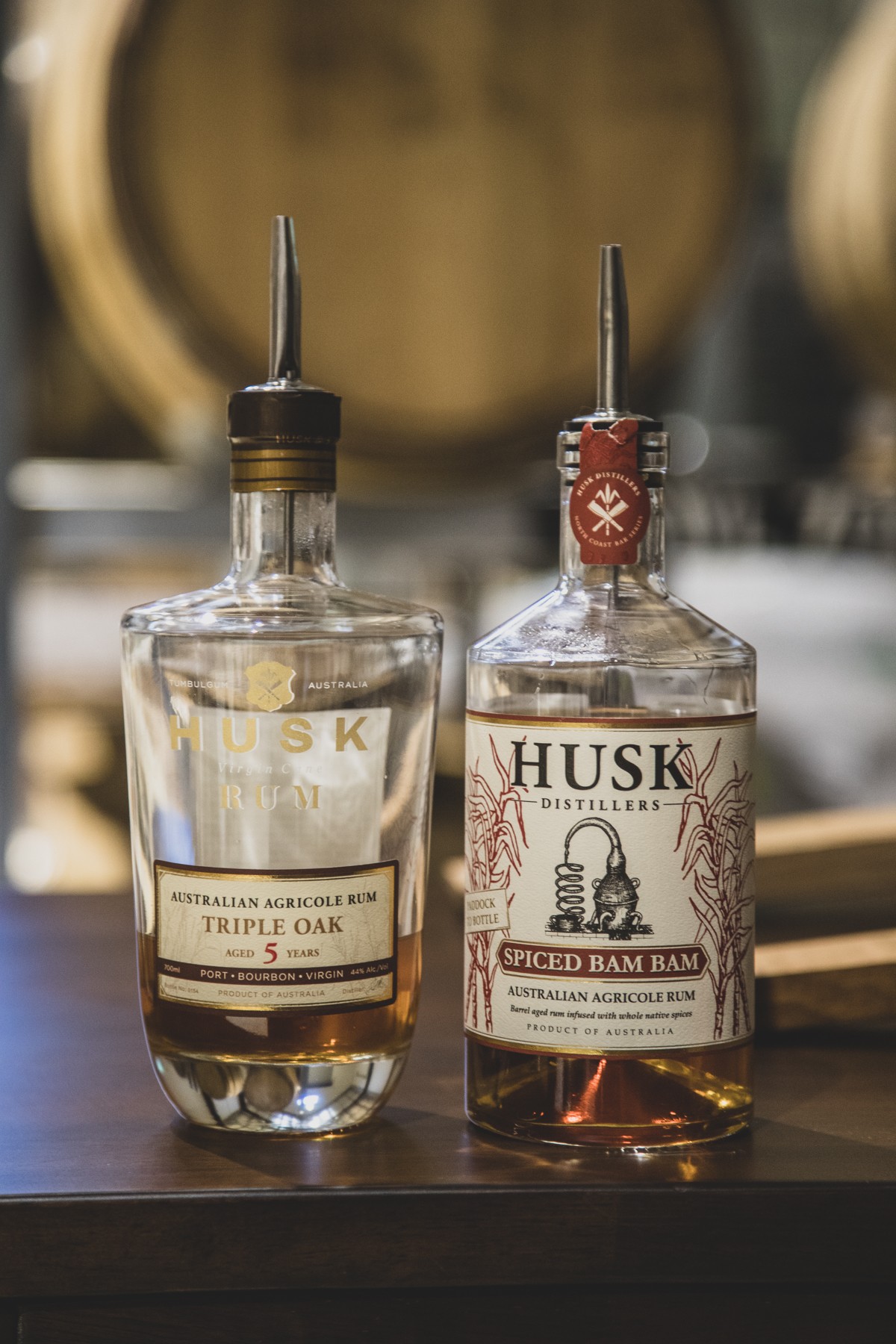 For the Messenger family, Ink Gin has been just one grain of sand in their massive sea-change story – creating Husk Distillery. Headed up by Paul and Mandaley Messenger, the decision to quit their well-to-do jobs as a scientist and writer respectively and buy up a sugarcane farm in Tumbulgum, NSW around 10 years ago was not a light-hearted one. Despite the risk it was a decision that they knew would change the course of their lives forever, for the better.

They started with an idea that was a little off-kilter. “Paul wanted to get away from the city life and make a change,” says Mandaley, “so we came out here with a view to make Agricole rum.”

It was an idea born from a trip to the Caribbean where they first discovered French style, or Agricole rum. Made from pure sugar cane, unlike traditional molasses rum, Agricole rum makes up only 3% of the world’s market.

Their aim was to find a sugar cane farm where they could experiment, distilling from paddock to bottle, and be the founding company in Australia to test this method. “We wanted to do something different. We really wanted to create our own character of rum… Something that speaks of this part of the world,” says Paul.

“We really wanted to create our own character of rum… Something that speaks of this part of the world.”

The property they stumbled upon in the Tweed Heads shire – with Wollumbin (Mount Warning) as the backdrop – was a dream and joy for Mandaley, who is a farm girl at heart, an animal lover by nature and a design whiz. “Being in the country and having my family work for us is just fantastic,” she says. “That’s what it’s all about for me. Of course, making the spirits is lovely too!”

Paul and Mandaley now have two of their daughters working on the property and in the business. Harriet, their Sales and Marketing Manager and the creative behind most of the businesses branding and labelling and Edwina, who’s in charge of logistics and assists in all aspects of the business – from co-ordinating export shipments to running tastings and events.

“It’s a dream that they’ve infected all of us with, and we’ve gone on with it ever since,” Edwina says.

The team at Husk are a tight-knit bunch. Not only are a lot of them related, they all have a story to tell about how they met, and the fate that brought them together. Their stories prove when you make a decision from your heart, the universe really does have your back. 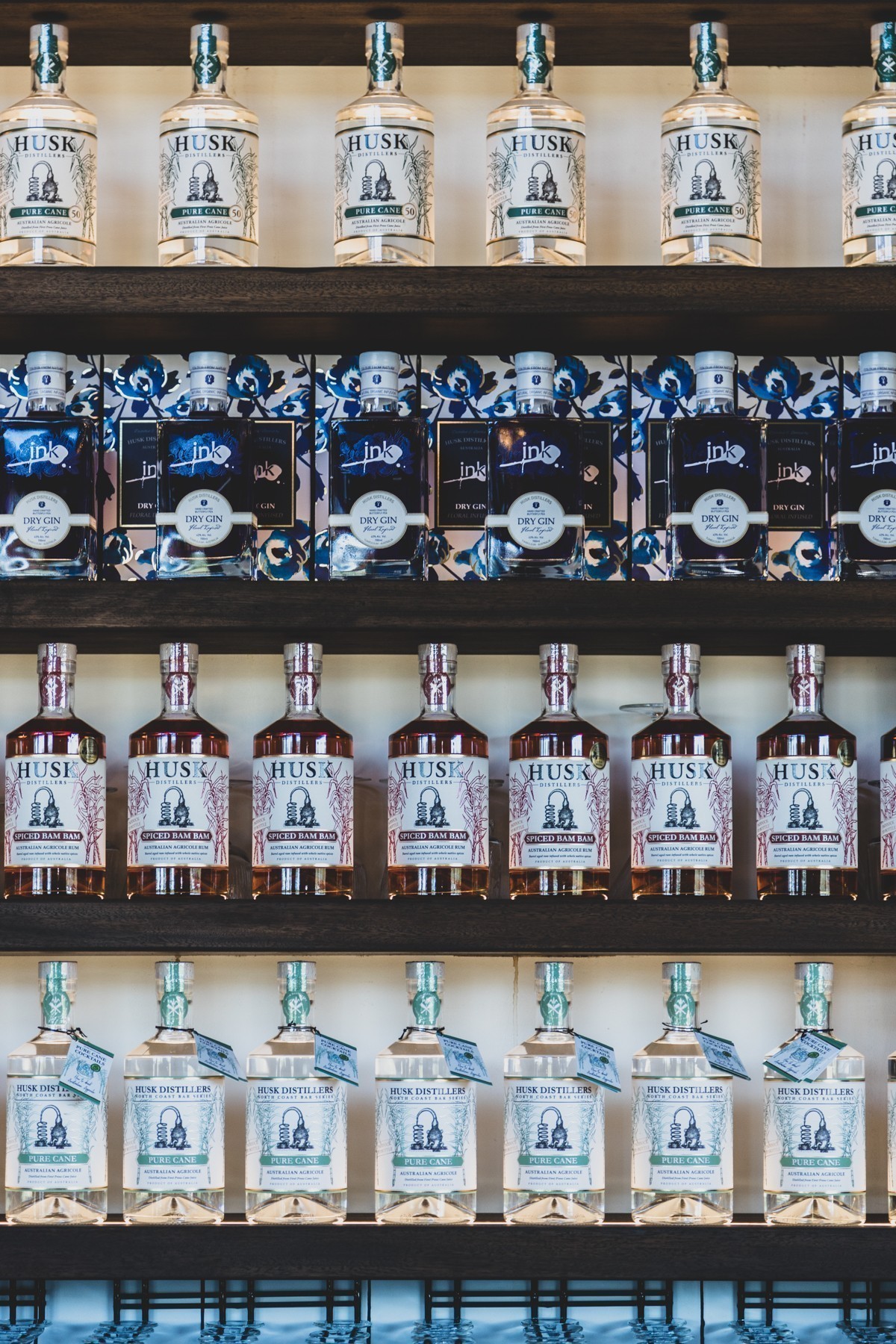 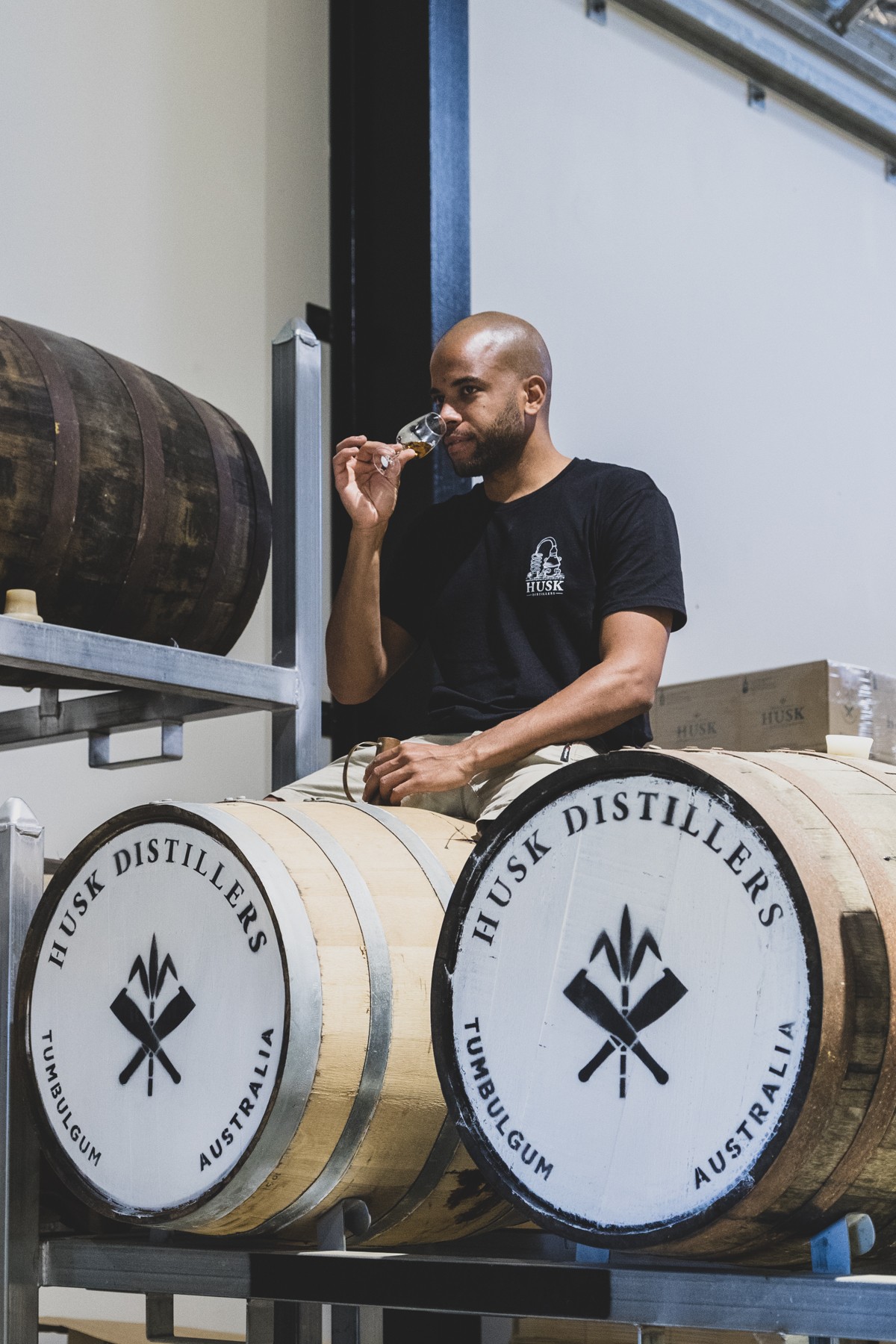 Head distiller, Quentin Brival, who just happens to be from Martinique, recalls being on holidays in Australia and wanting to find a good bottle of Agricole rum.

“I Googled it and found that these guys were doing exactly what we were doing back at home. I read how Paul visited the Caribbean and fell in love with the rum culture. That story resonated with me a lot,” he says.

“I went to put a bottle of the white rum in my shopping cart and an ad popped up on the side looking for a distiller. You know one of those moments in your life when it was just meant to happen? I was from Martinique, he went to Martinique. His dream was to bring the rum back here and create an Australian expression of that. I applied straight away.

“A week later he gave me a call. Two weeks later I came here for the interview… I loved the vision he had for this place and he loved what I could bring to it as well. Three or four weeks later, I was here making rum!”

“You know one of those moments in your life when it was just meant to happen?”

A few years after the release of their first rum came the ever-popular Ink Gin. Three years in the making, the Husk team collected and trialled about 15 botanicals they thought would work well, most being native.

Being a scientist with 30 years of experience behind him, Paul approached the creation of the Ink Gin from two perspectives. “It’s a marriage of art and science, that’s how I like to look at it’,” he says.

The challenge was to smell and taste each botanic ingredient individually to ensure they would blend together in terms of taste. They also had to be careful not to take the PH to levels which would knock out the very sensitive butterfly pea flower, which is the magic behind it’s distinct blue colour.

“The Ink Gin was my baby when we first started. Nobody knew anything about it. Selling one bottle here and one bottle there,” says Harriet. “Then it’s grown into something I’m pretty proud of. I fell in love with the business because we put so much into it.” 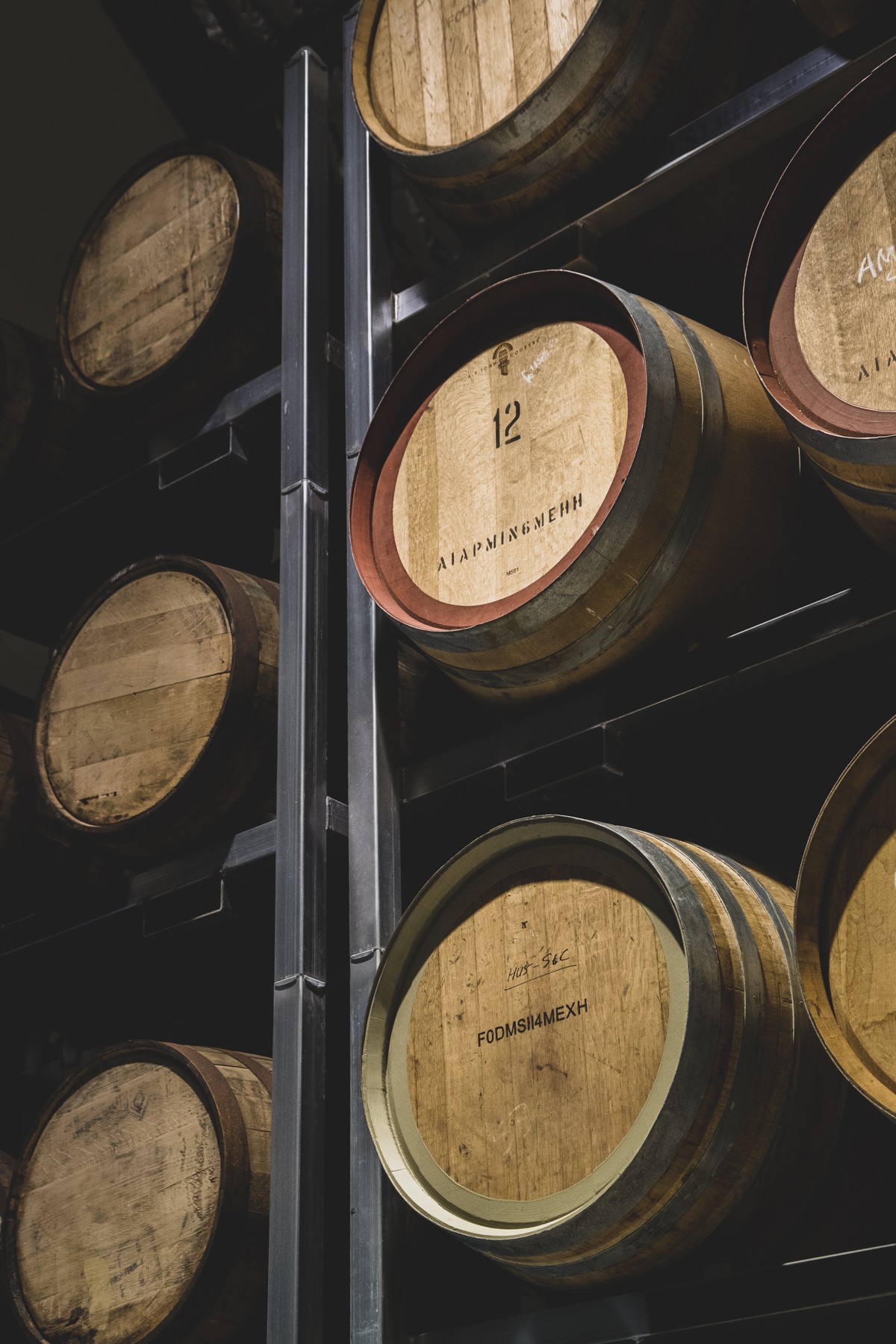 This image:  The rum ages for 6-12 months in American Oak barrels This image:  Paul and Quentin

On the eve of the opening of their public cellar door, the family bustles about the property, multi-tasking as they organise food, cocktails and a spectacular site for their guests.

What started in a farm shed has blossomed into a full fledged venue for the public to visit and experience the Messenger’s drinks. An impressive brick building homes the new distilling plant, paired with a long table venue, public bar and cafe. 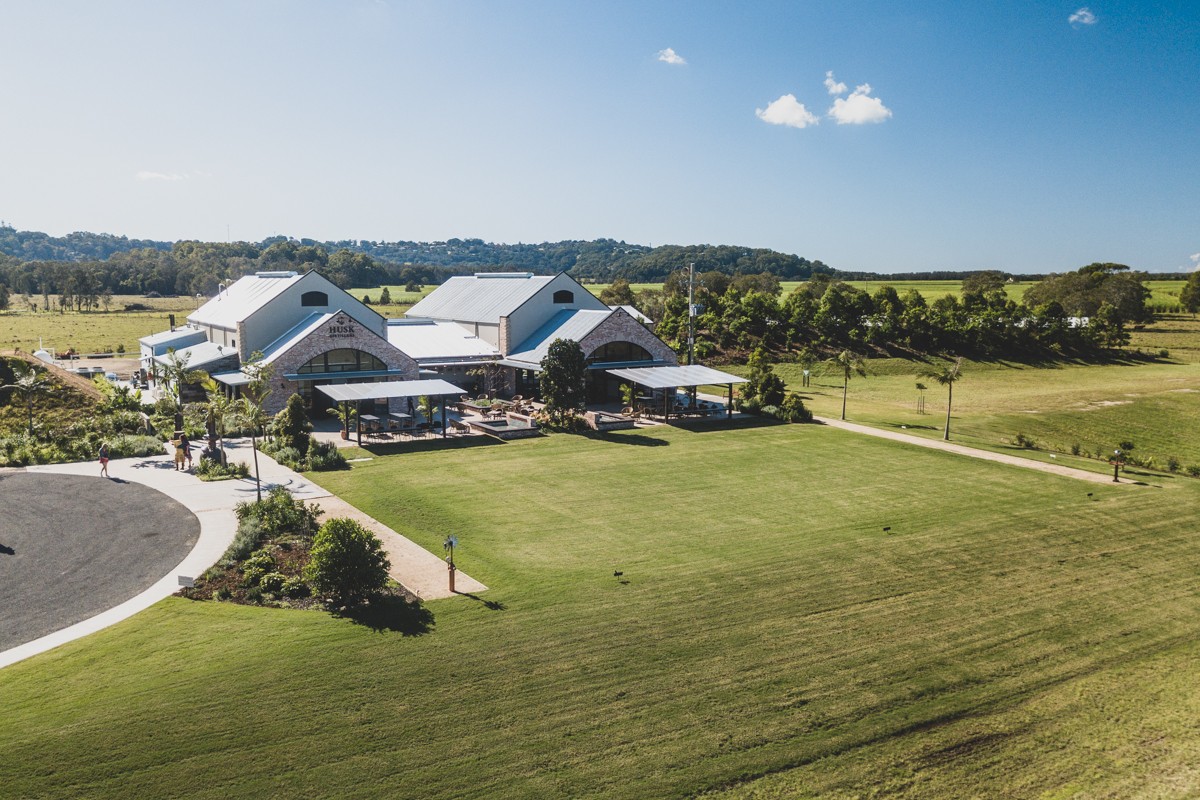 This image:  The Husk Distillery and cellar door, Tumbulgum, NSW 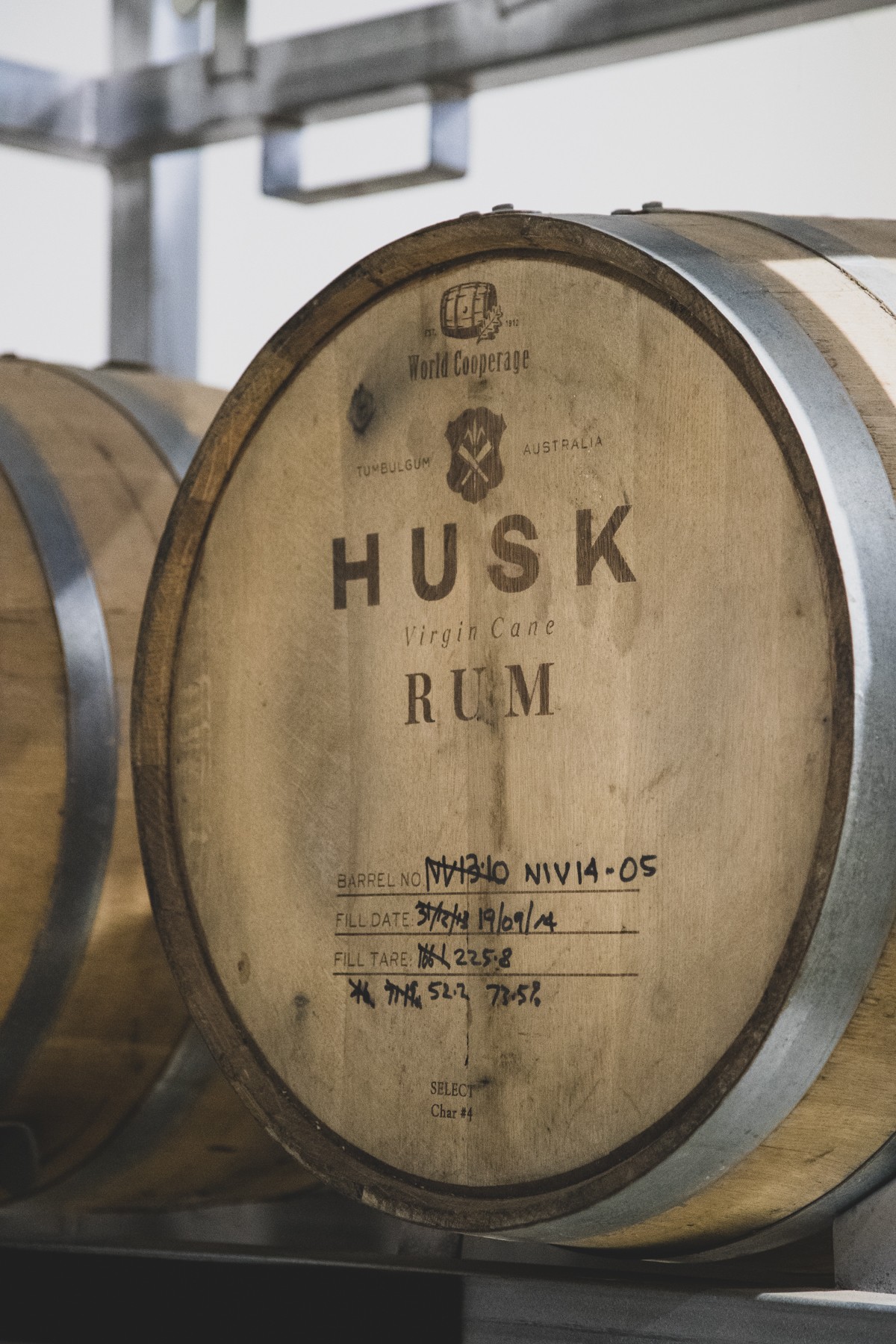 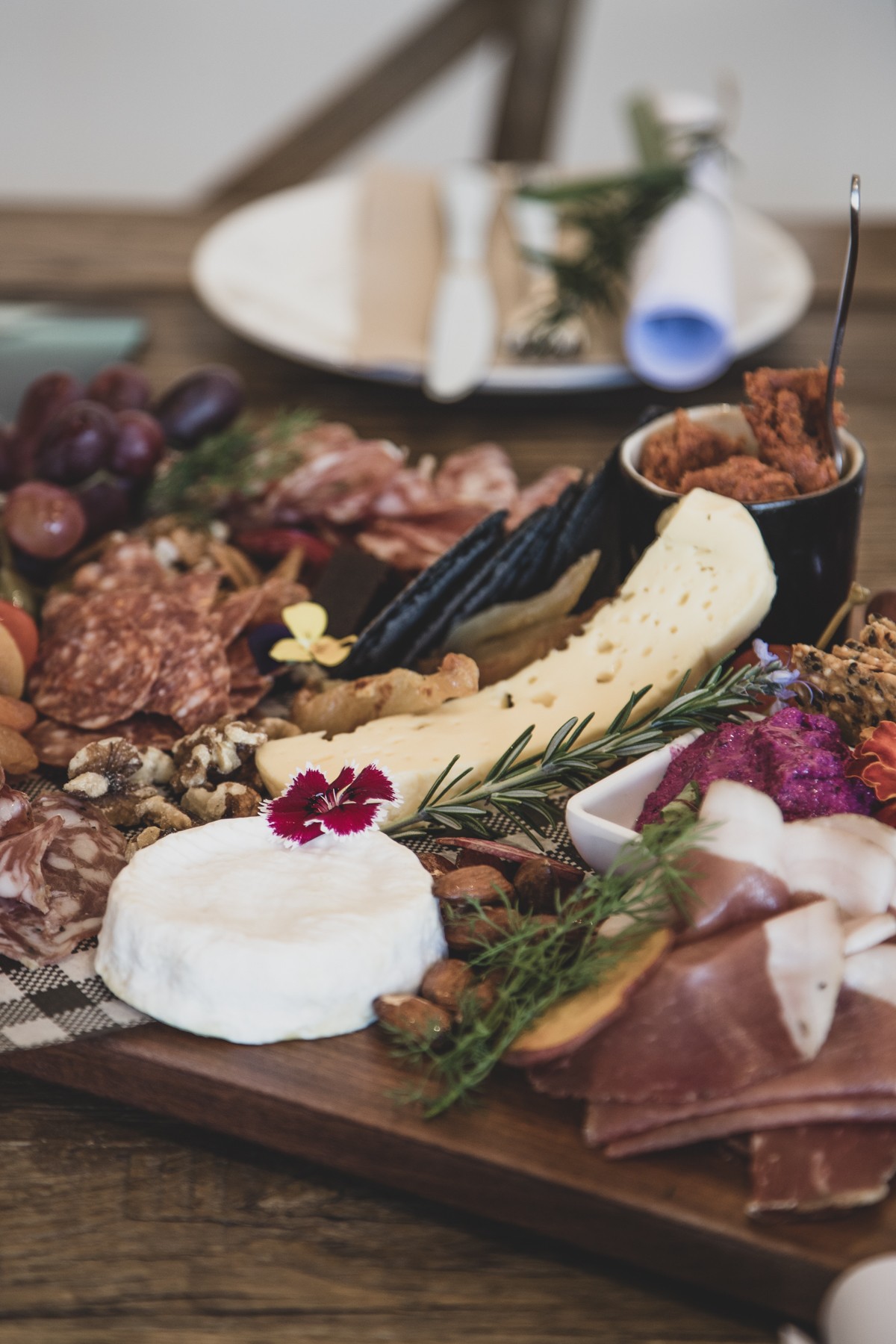 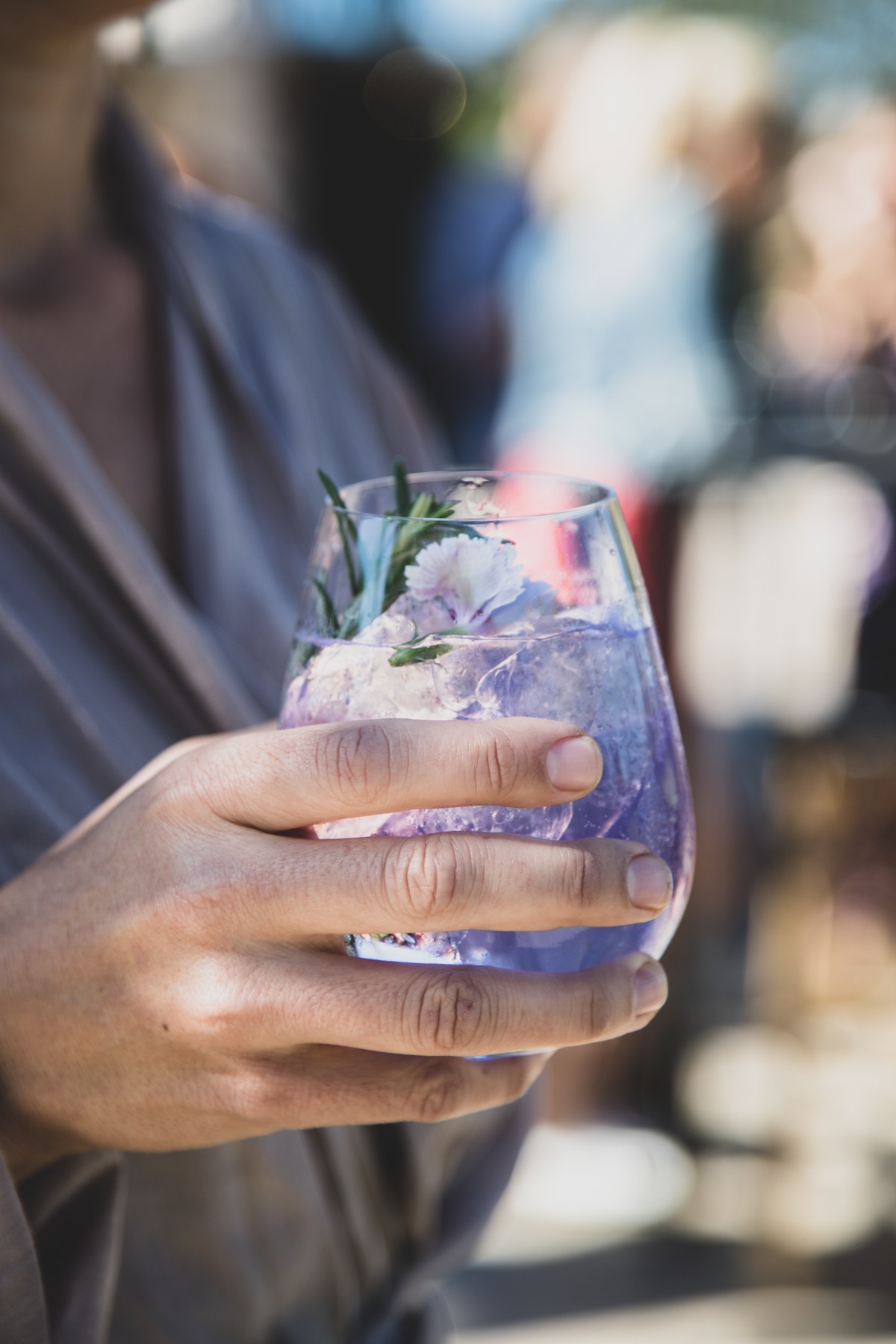 Guests can bring their own picnic blanket to sprawl on the expansive lawn, order a platter and enjoy the aperitifs on offer. Tours are also available if you’d like to learn more about the process behind the product.

Paul says, “the reason behind wanting to open their distillery to the public, is to teach people the distinct link between agriculture and the products that come out of it. It’s the connectivity. People can see where the products come from and draw a line between the paddock, what we grow and what we produce.”

Focussed completely on conscious consumption, Husk promotes a culture of quality over quantity. “Drink less, enjoy more, is what we say on all our spirits, and we think that’s really important. We are encouraging to drink better quality and understand more what they are drinking” Paul remarks.

The bar is full of lavender-coloured tipples and lucky guests waiting to try the experimental drinks on offer. With the first sip of my beautifully dressed cocktail I get a sense of what he is talking about. With quality comes satisfaction. And you can see it on the family members faces as they proudly step back and see the results of their labour, and on the faces of those around me tasting the fruits of their success.

Triple threat Katie has leapfrogged from running her own eco-conscious fashion label to writing and now managing graphic design projects across a gamut of industries from her back porch in the Sunshine Coast Hinterland, from branding and logos through to websites, ebooks a magazines, right up to poster and billboard concepts.

Change Location
To find awesome listings near you!